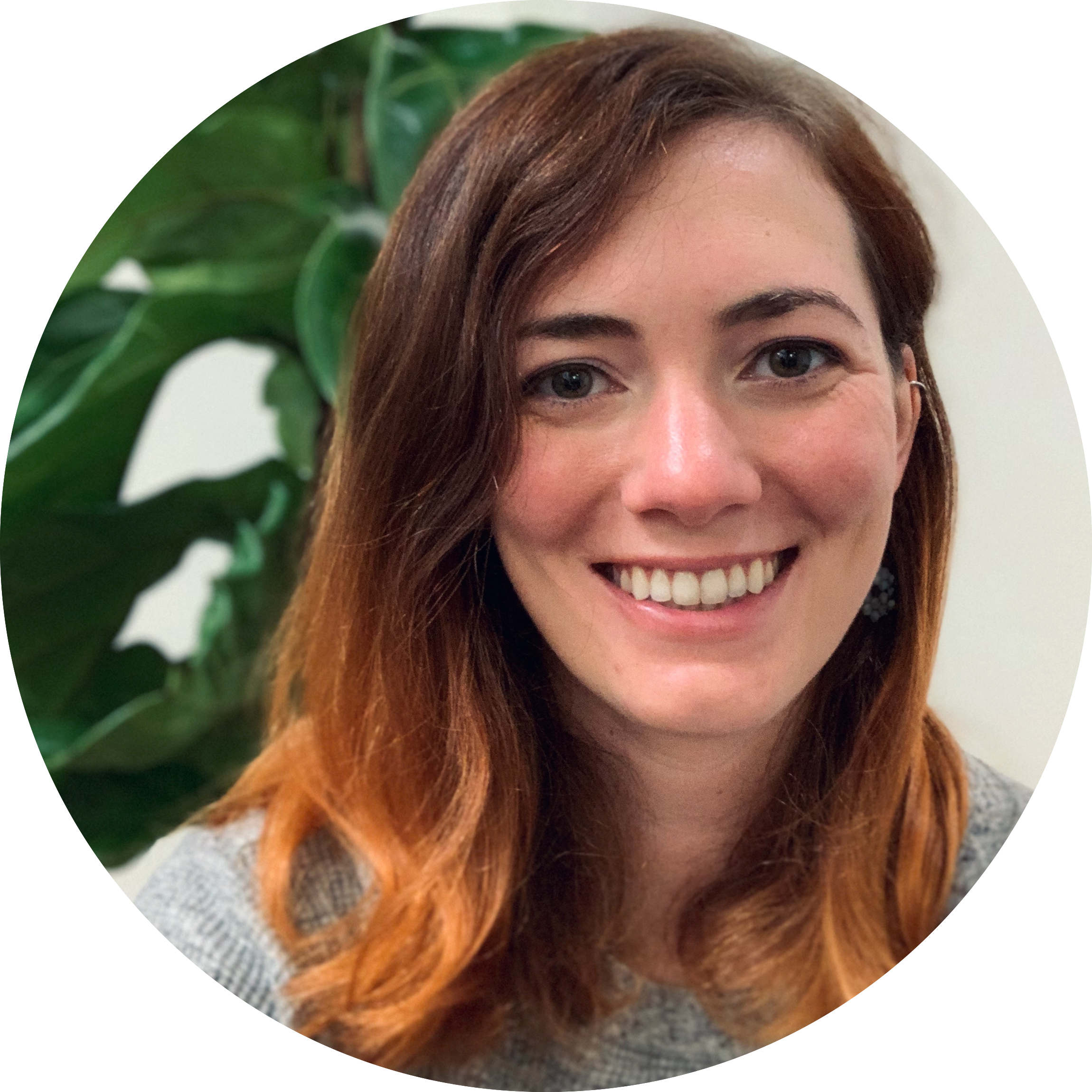 I'm currently a Stanford - Santa Cruz Cosmology Fellow and a UC Santa Cruz Chancellor's Fellow. I study the formation and evolution of galaxies using data from across the spectrum, optical to radio. I'm interested in radial color gradients in galaxies, both as a bias in size measurements and as an independent probe of galaxy evolution. I also use multi-wavelength observations of post-starburst galaxies to investigate the physical mechanisms that cause galaxies to stop forming stars. I publish under my full name, Katherine A. Suess. I am an active member of the SQuIGGLE collaboration and the JADES team. I got my PhD from the UC Berkeley Department of Astronomy, where I was an NSF Graduate Research Fellow and a UC Berkeley Graduate Chancellor's Fellow. My primary thesis advisor was Mariska Kriek. I studied physics in undergrad at the University of Colorado, Boulder. I worked with Jeremy Darling to identify OH megamasers in the ALFALFA neutral hydrogen survey and with Marty Snow to model solar extreme ultraviolet irradiance.

Right now, I'm primarily preoccupied by two questions. How do galaxies grow? And what makes galaxies stop forming stars? To study galaxy growth, I use multi-band high-resolution imaging from the Hubble Space Telescope and the new James Webb Space Telescope to measure radial color gradients in galaxies. These color gradients can bias measurements of galaxy sizes, affecting our understanding of how galaxies grow. But color gradients aren't just a bias, they're an additional independent way to probe galaxy evolution: they represent radial variations in stellar population properties, and can thus shed light on how galaxies assemble their mass.I also study galaxy "quenching," the process that transforms disky blue star-forming galaxies into red elliptical quiescent galaxies. I primarily study this transition by investigating post-starburst galaxies. These rare galaxies have just completed their major star-forming episode; since they represent the direct products of the quenching process, they're the ideal laboratory to understand what causes galaxies to quench. Check out my recent first-author papers:

Rest-frame near-infrared sizes of galaxies at cosmic noon: objects in JWST’s mirror are smaller than they appeared 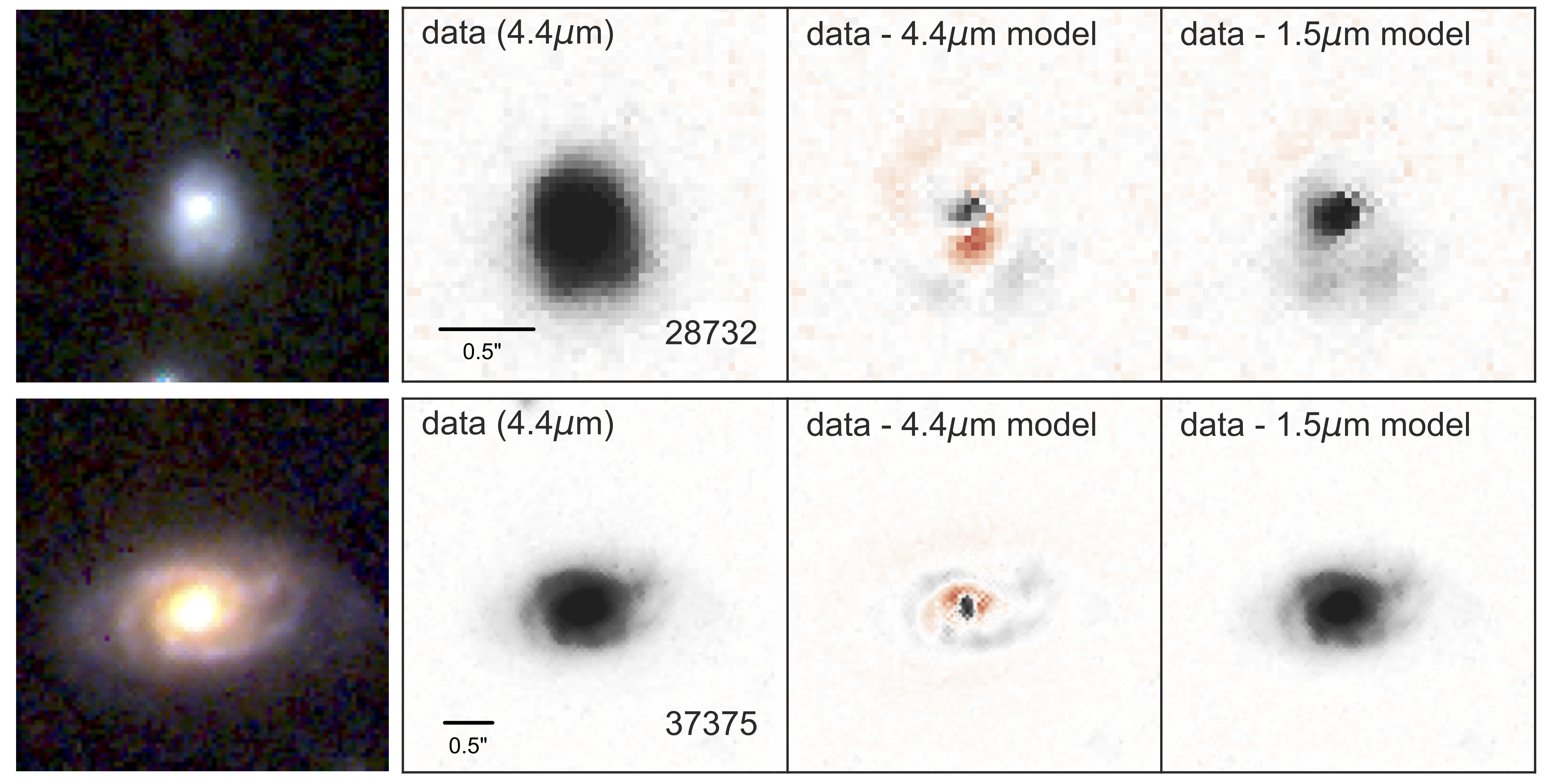 For the very first time, we measured the rest-frame infrared sizes of galaxies at cosmic noon! Prior to the launch of the James Webb Space Telescope, we were only able to see rest-frame optical light from galaxies at z>1. With the new NIRCam instrument, for the first time we can directly observe longer wavelengths; this rest-frame infrared light is a more accurate tracer of stellar mass, as it is less affected by radial gradients in stellar ages or dust attenuation. We demonstrate that the 4.4um sizes of massive galaxies are significantly smaller than their 1.5um sizes: at 10^11 solar masses, galaxies are 25% smaller at 4.4um. This indicates that galaxy centers are redder, likely due to additional dust or the build-up of galactic bulges. The trends we find in this paper impact our understanding of the size growth and evolution of galaxies, and suggests that previous studies based on rest-frame optical light may not have fully captured the mass-weighted structural evolution of galaxies. This paper represents a first step towards a new understanding of the morphologies of early massive galaxies enabled by JWST’s infrared window into the distant universe.

Recovering the star formation histories of recently-quenched galaxies: the impact of model and prior choices 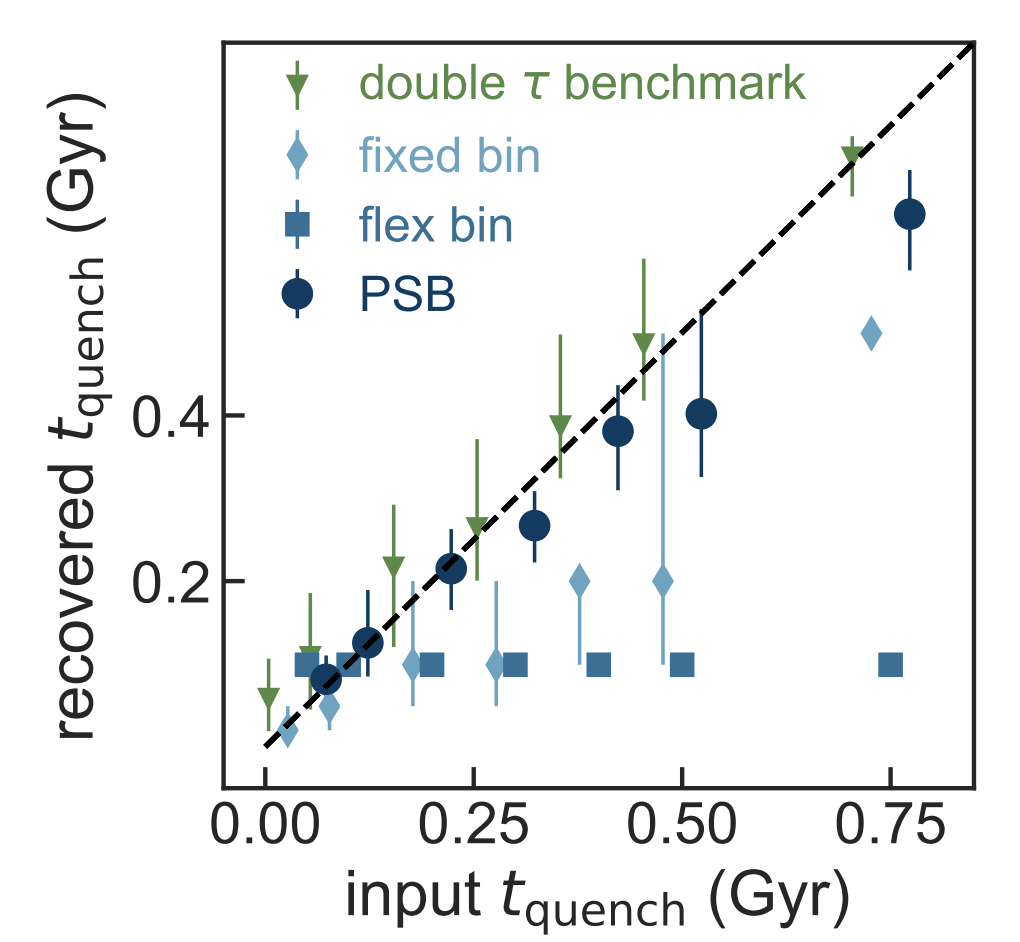 Accurate models of the star formation histories (SFHs) of recently-quenched galaxies can provide constraints on when and how galaxies shut down their star formation. The recent development of “nonparametric” SFH models promises the flexibility required to make these measurements. However, model and prior choices significantly affect derived SFHs, particularly for post-starburst galaxies (PSBs) which have sharp changes in their recent SFH. In this paper, we create mock PSBs, then use the Prospector SED fitting software to test how well four different SFH models recover key properties. We find that the two "out-of-the-box" non-parametric Prospector SFH models fail to accurately reproduce the SFHs of mock PSBs. Instead, we develop a new way of parameterizing the SFH which allows the most recent timebin to have both variable SFR and variable width. By introducing this extra freedom to the recent SFH, we find that our model is able to accurately reproduce both the time since quenching and the burst fraction of mock PSBs. This additional flexibility in the recent SFH also means that our model is able to accurately fit both star-forming and quiescent galaxies, and is suitable for broader use by the SED fitting community. This model is now part of the public Prospector repo 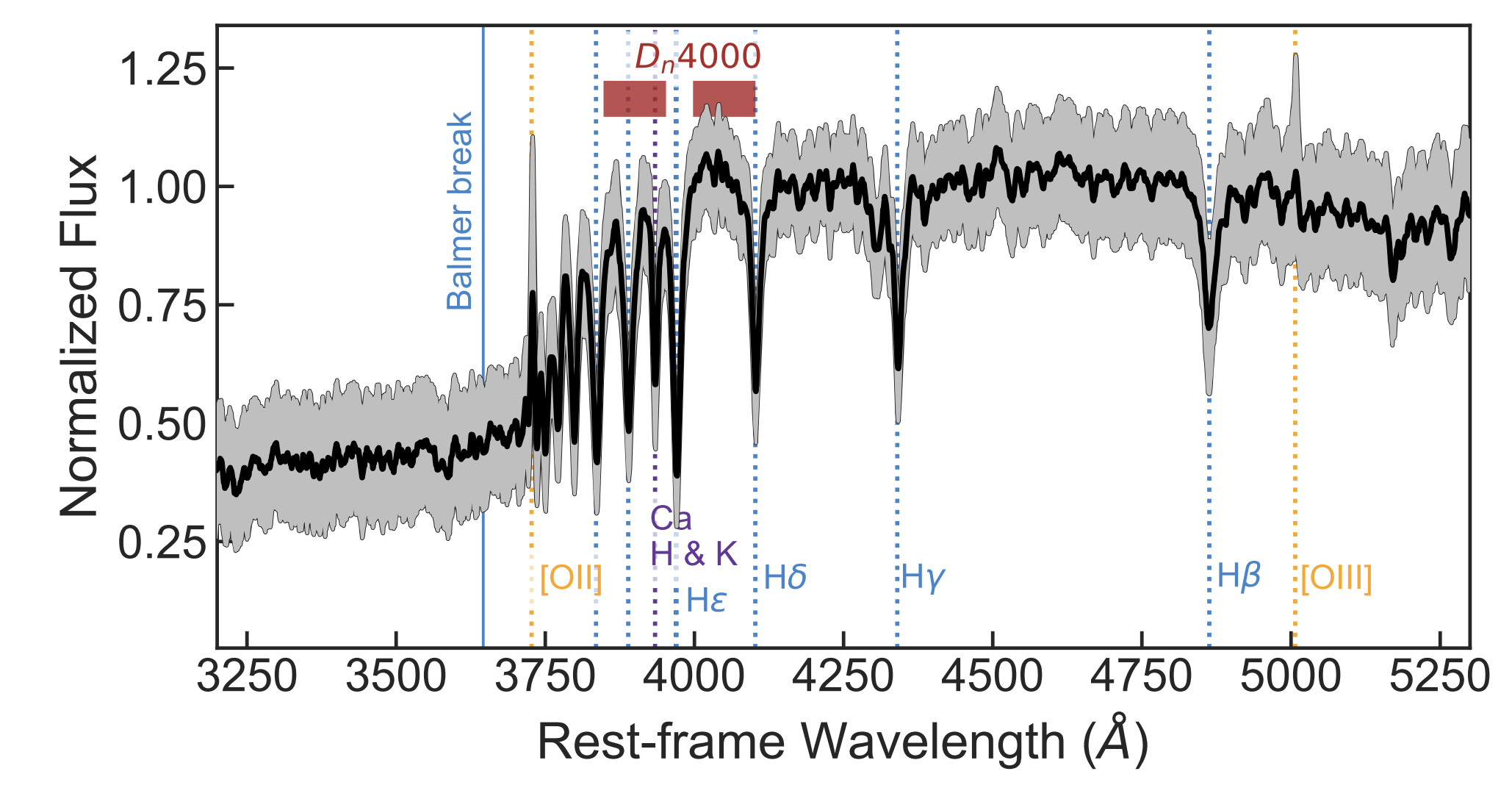 This paper presents the SQuIGGLE sample of intermediate-redshift post-starburst galaxies. The spectra of these rare galaxies indicate that they recently and rapidly shut off their major epoch of star formation, making them the ideal sample to study the still-mysterious quenching process. We use a color-based technique to select 1300 of these galaxies from SDSS spectra, then study their properties. The galaxies in our sample tend to be very massive (10^11 solar masses) and suppressed more than an order of magnitude below the star forming main sequence. We use an innovative new technique for precisely measuring galaxy star formation histories to infer that >75% of the sample formed at least a quarter of their total mass in a recent starburst, which ended about 200Myr before observation. We also compare the SQuIGGLE sample to other post-starburst galaxy samples, finding that our sample is on average younger and more burst-dominated. This large sample of bright post-starburst galaxies at intermediate redshift opens a wide range of studies into the quenching process.

Dissecting the size-mass and \(\Sigma_1\)-mass relations at 1 < z < 2.5: galaxy mass profiles and color gradients as a function of spectral shape 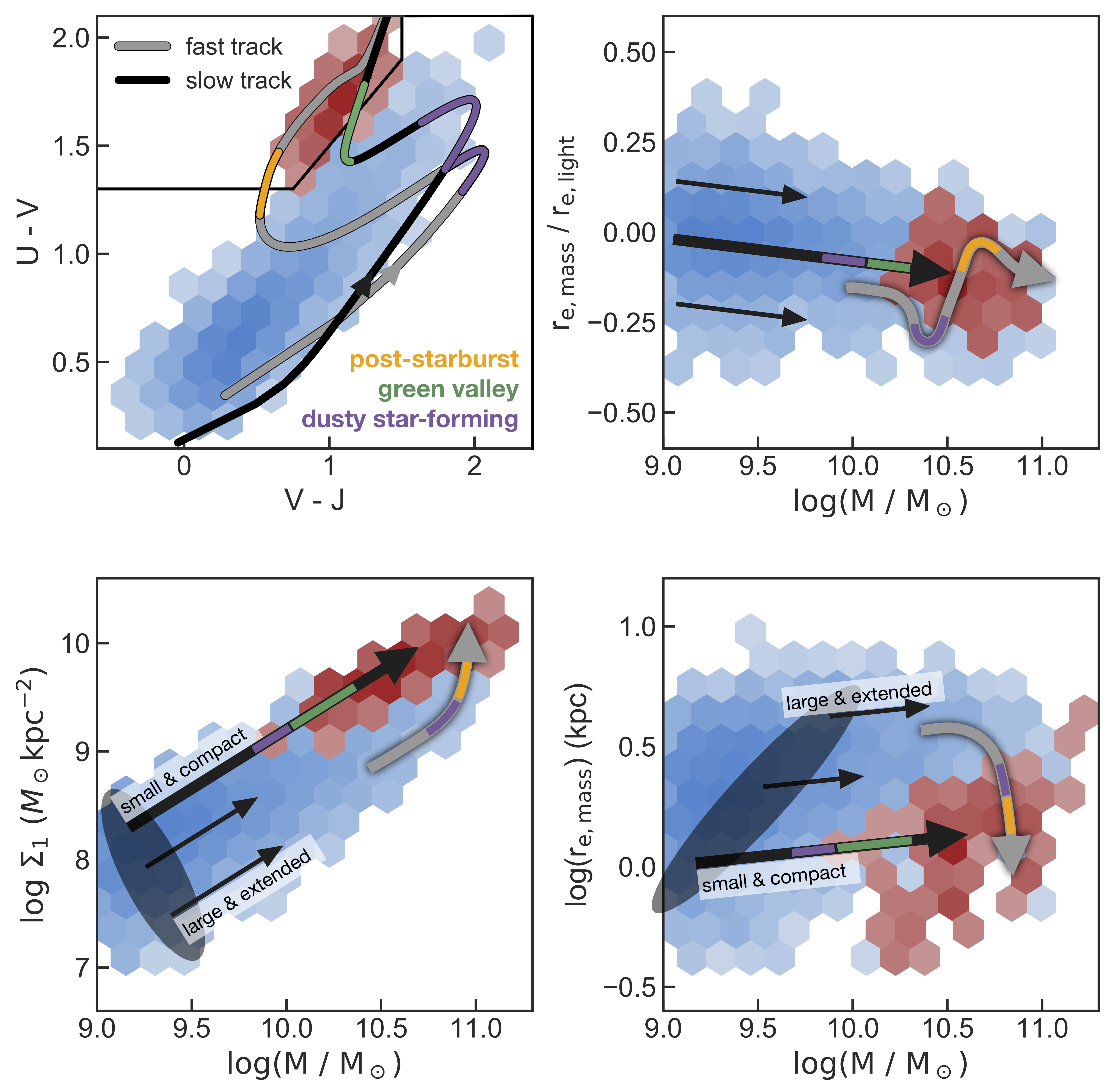 In this paper, we separate the Suess+19a sample of galaxies into sixteen different groups with similar spectral shapes. These groups allow us to investigate how galaxies move through the size-mass and \(\Sigma_1\)-mass structural planes as they evolve. We find that the star-forming size-mass relation is composed of a series of steep, overlapping parallel relations for galaxies with different specific star formation rates. This new view of the star-forming size-mass relation can be fully explained as a transformation of the \(\Sigma_1\)-mass relation and its scatter. We also find evidence that there are two distinct pathways for galaxies to shut down their star formation: a fast quenching pathway which requires structural change, and a slow pathway that does not. Fast-quenching post-starburst galaxies are primarily found at higher redshift, while slow-quenching green valley galaxies dominate the growth of the quiescent sequence at low redshift. Our results suggest that star-forming galaxies grow gradually up the \(\Sigma_1\)-mass relation until (a) they naturally reach the high \(\Sigma_1\) values required for quiescence, or (b) a compaction-type event rapidly increases their \(\Sigma_1\).

Color gradients along the quiescent galaxy sequence: clues to quenching and structural growth 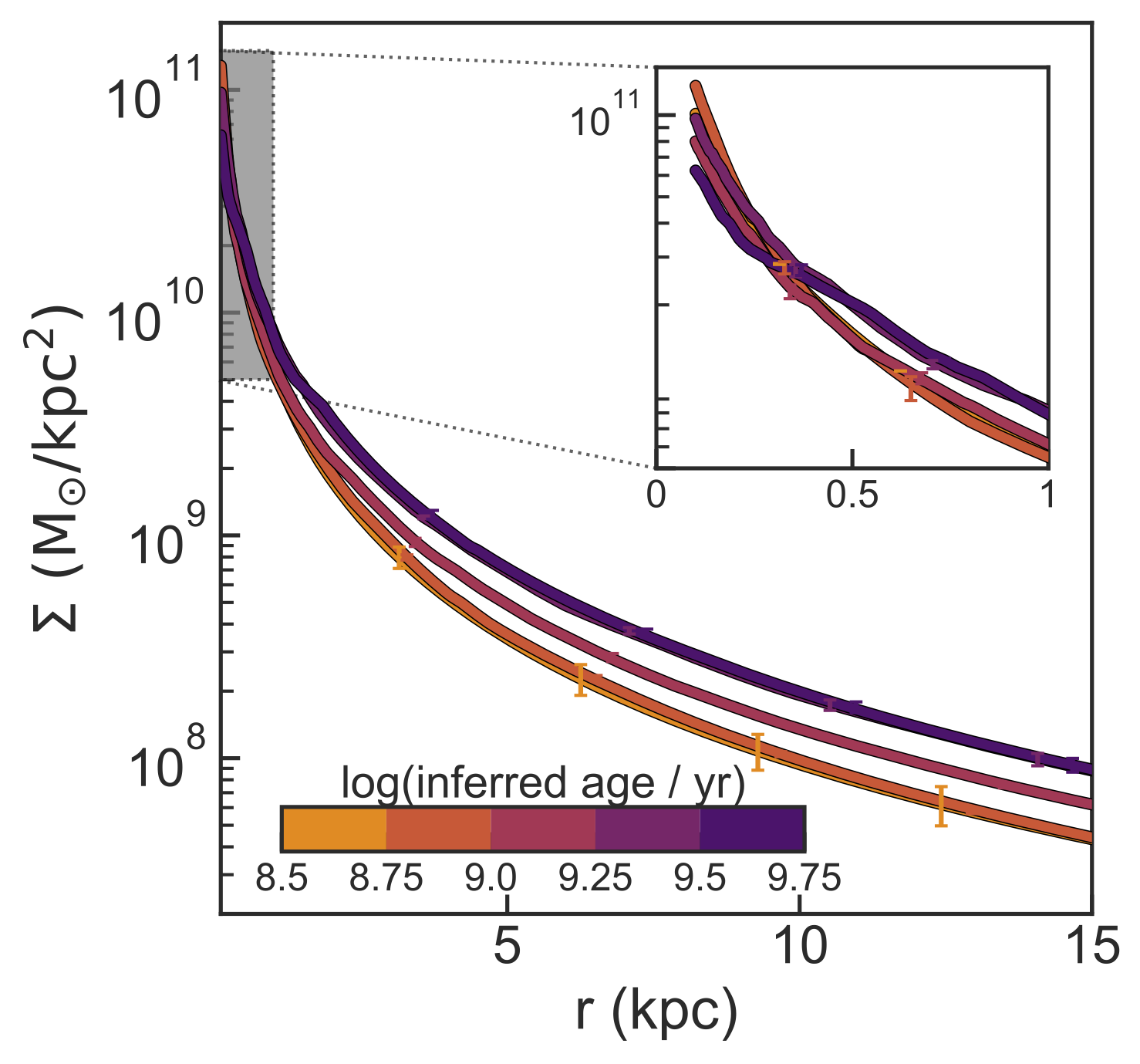 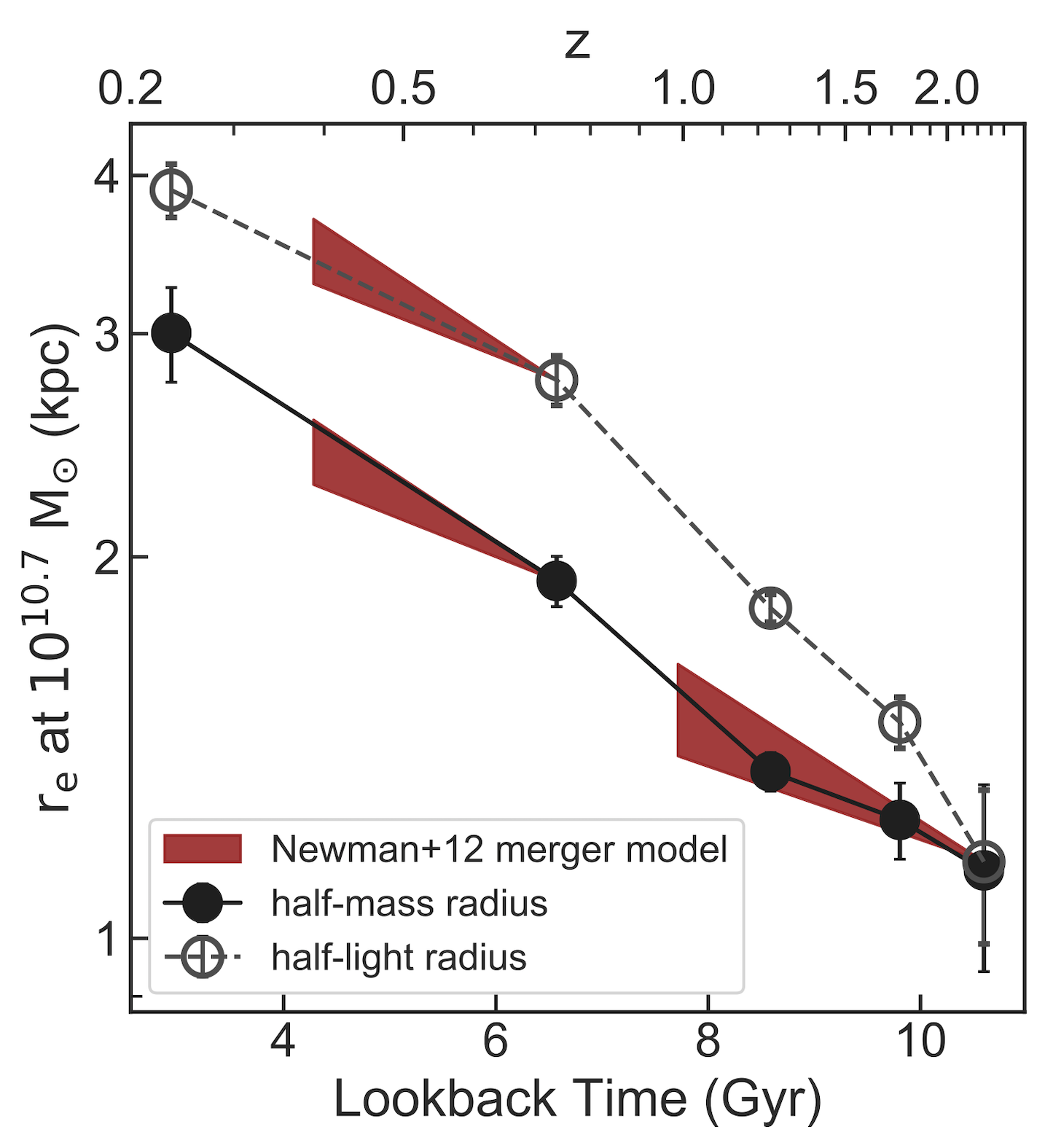 Here, I extended my previous analysis of color gradients and half-mass radii down to lower redshifts. We found that color gradients are nearly flat at z~2.5, then evolve rapidly until z~1; this evolution then seems to slow at z<1. This means that galaxy half-light radii are a biased tracer of galaxy sizes. This is particularly important for quiescent galaxies, whose half-light radii increase incredibly rapidly. Because quiescent galaxies aren't forming stars, this size evolution is difficult to explain. We find that the redshift evolution of quiescent half-mass radii is fully consistent with inside-out growth via minor mergers alone without the need for progenitor bias. 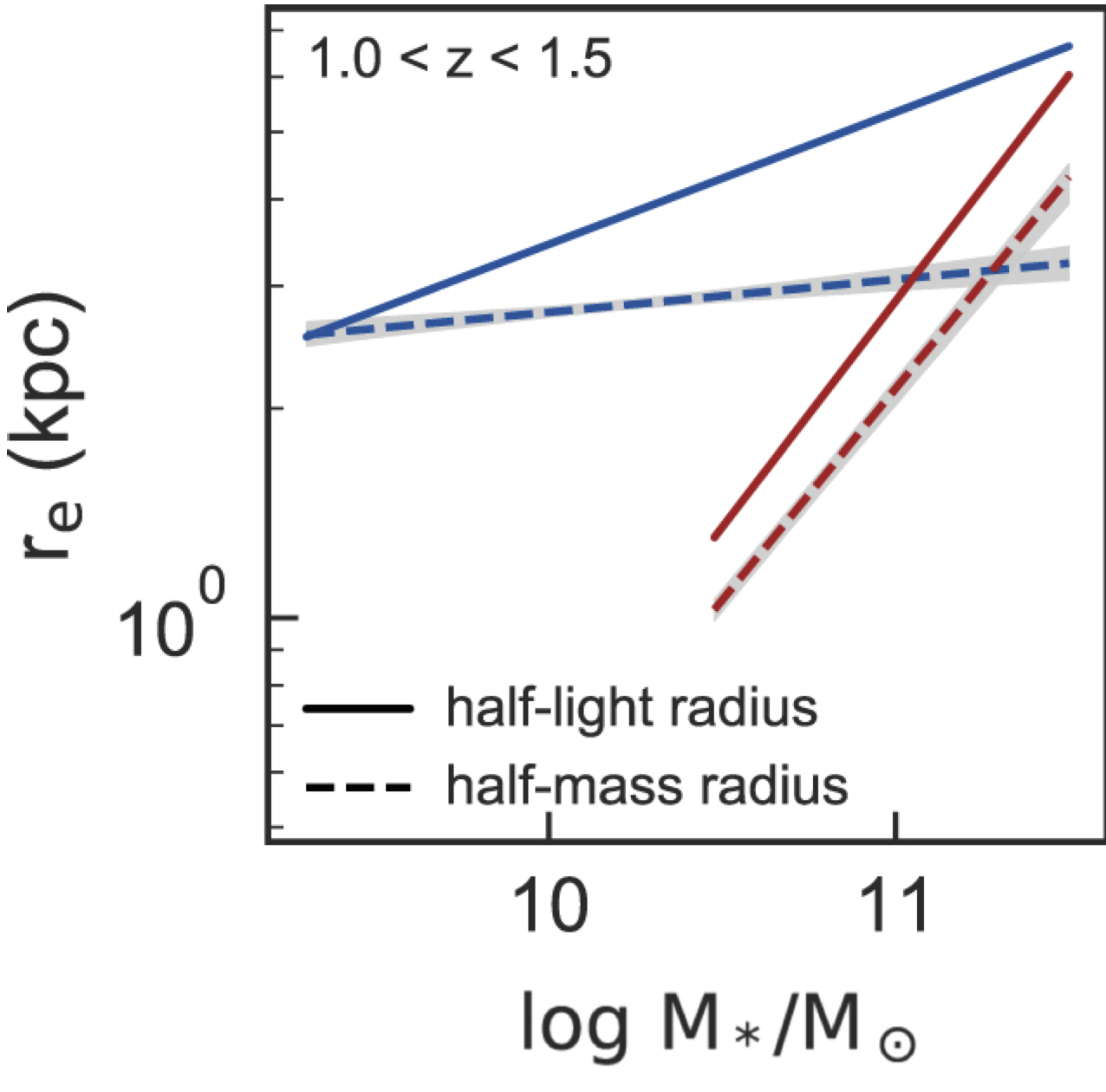 We typically measure the sizes of galaxies by looking at their light profiles. But, light is a biased tracer of mass: radial variations in stellar population properties cause the mass and light profiles of a galaxy to differ. In this paper, we used multi-band imaging of ~7,000 galaxies to measure their radial color gradients. We found that most galaxies are redder in the centers than in the outskirts, and so half-mass radii tend to be smaller than half-light radii. This changes both the normalization and the slope of the galaxy mass-size relation. In particular, we find that at 1.0 < z < 2.5, most of the apparent evolution in galaxy sizes is actually due to color gradient evolution. 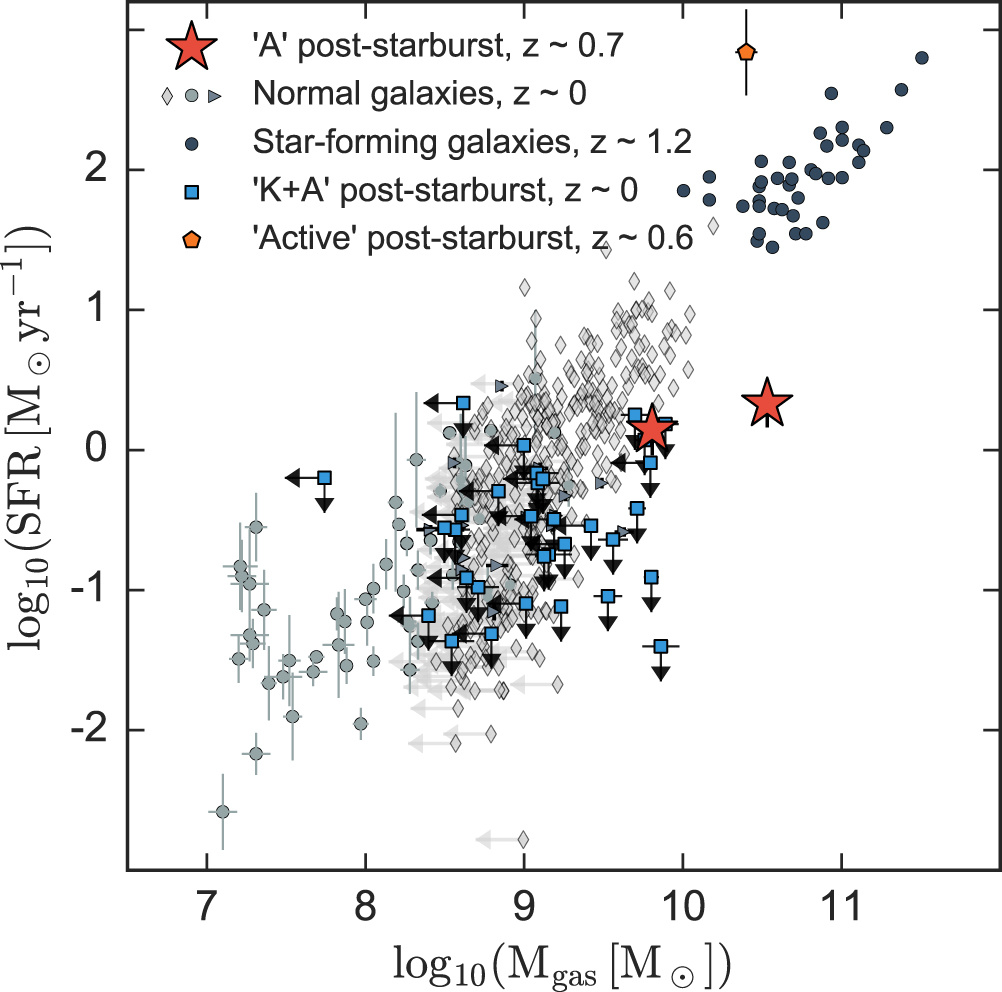 Because stars form out of molecular gas, most theoretical mechanisms for galaxy quenching focus on how to remove or deplete molecular gas reservoirs. We set out to test these theories by examining the molecular gas content of post-starburst galaxies at z~0.7. These galaxies have just finished their major star-forming episode, and don't appear to be forming many new stars. However, we found that these galaxies still contain large reservoirs of molecular gas. What is preventing the gas in these galaxies from forming stars? Follow-up projects to come... 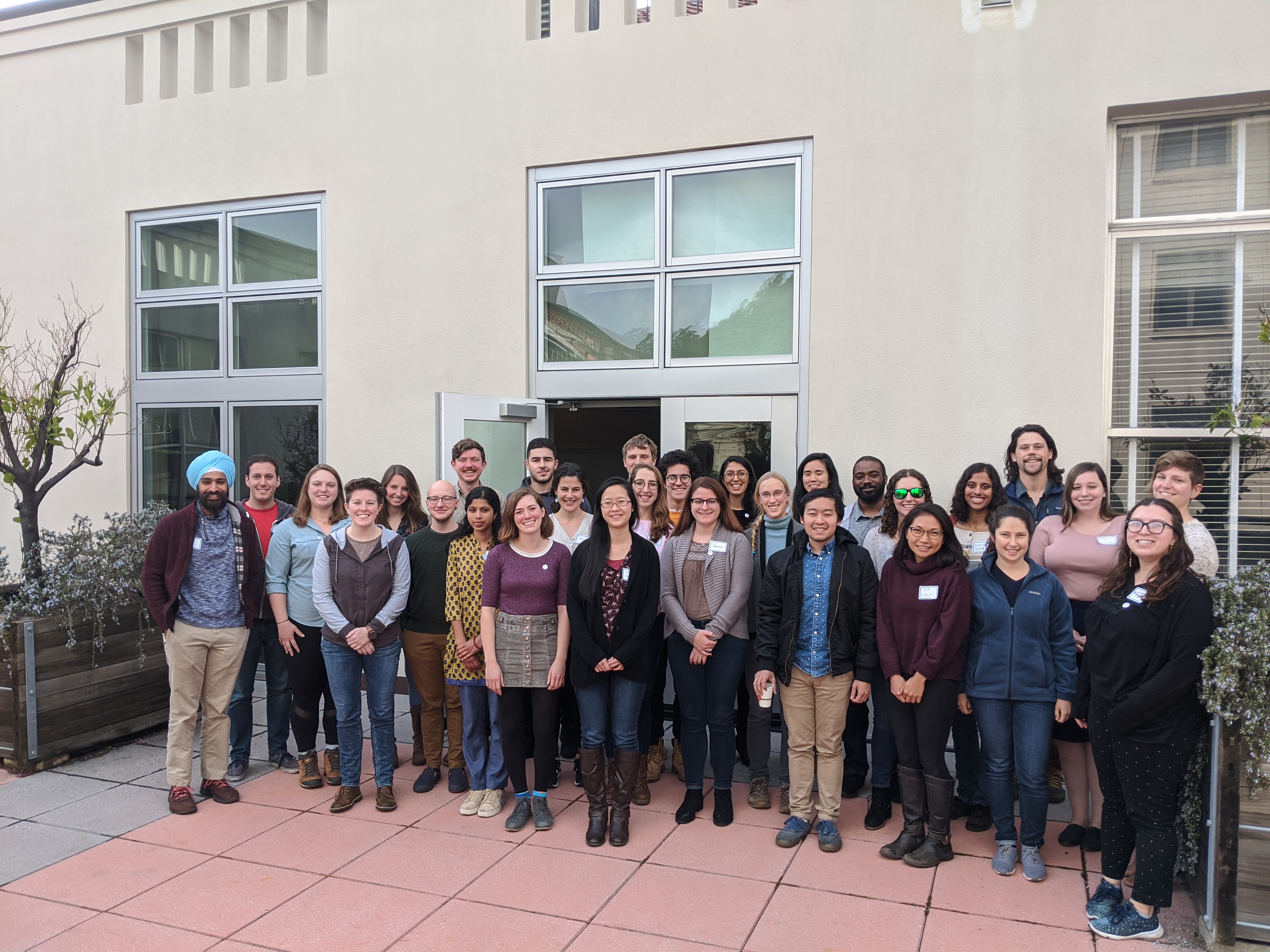 I'm passionate about improving the climate in physics & astronomy. In graduate school, I was one of two lead coordinators for Respect is Part of Research, a graduate student group that runs annual peer-led sexual assault and sexual harassment prevention workshops for incoming first-year graduate students. RPR's primary mission is to create a respectful, positive working environment where everyone can do their best science. While our main focus is on gender-based discrimination in order to fulfill official UC and Title IX requirements, we acknowledge that prevention work must be intersectional. As such, our workshop also addresses microagressions, stereotype threat, and effective bystander intervention. As of 2020, RPR was active in eight STEM departments at UC Berkeley; in 2019, I led training for 57 peer facilitators and 278 incoming graduate students. In January 2020, I also led a two-day workshop attended by ~25 physics & astronomy grad students from a dozen different institutions to teach them how to start their own peer-led climate workshops in their home departments. As of fall 2020, five new RPR chapters have already been started as a result of this workshop. Please contact me if you're interested in learning more about RPR, or want to start a similar peer-led workshop at your own institution! As part of this effort, I served on the Coordinated Community Review Team for Sexual and Gender-Based Violence and Misconduct for two years. 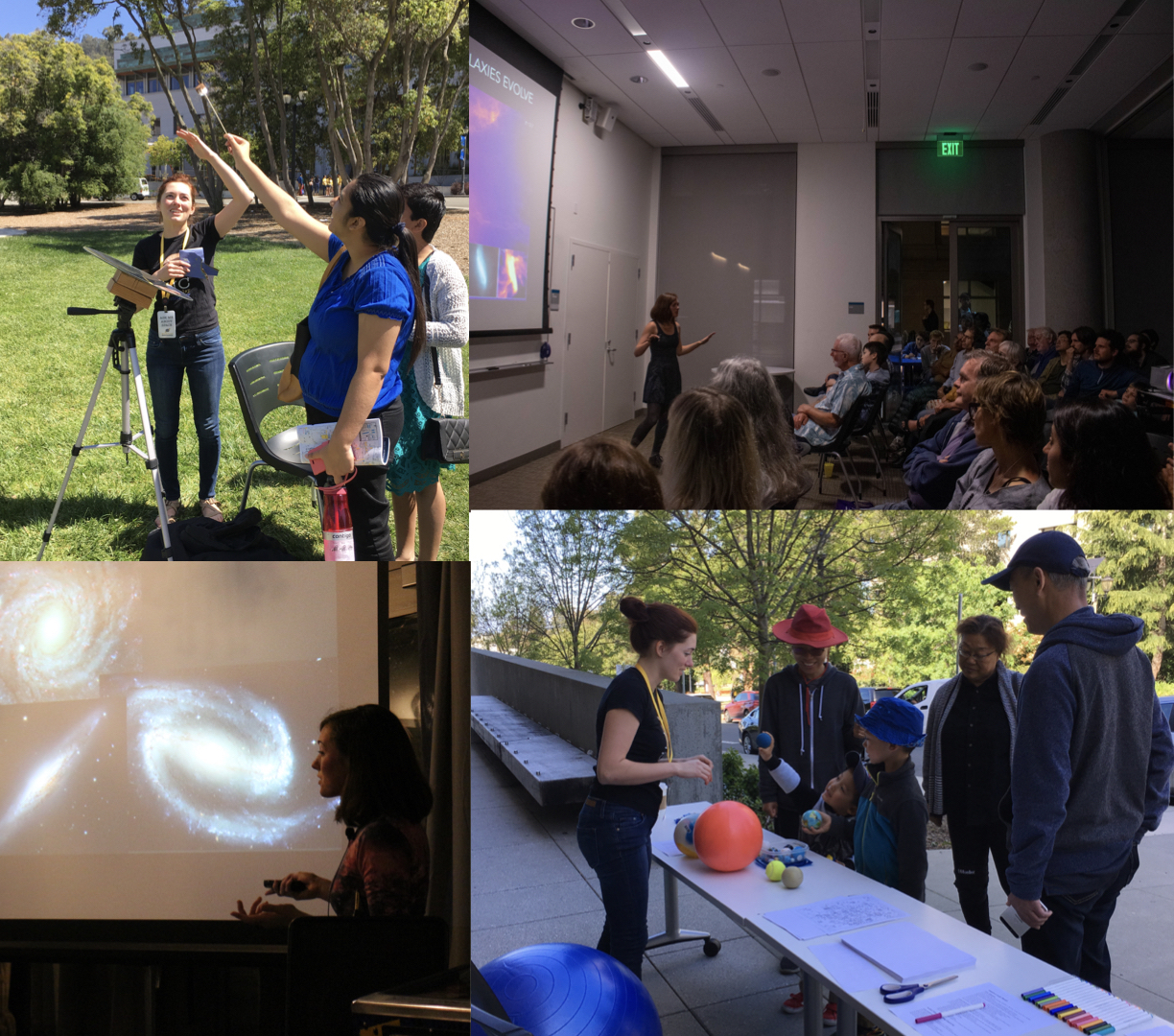 In addition to research and service within astronomy, I love sharing my passion for astronomy with the public. Find me at Cal Day, Grounds for Science, or Astro Night 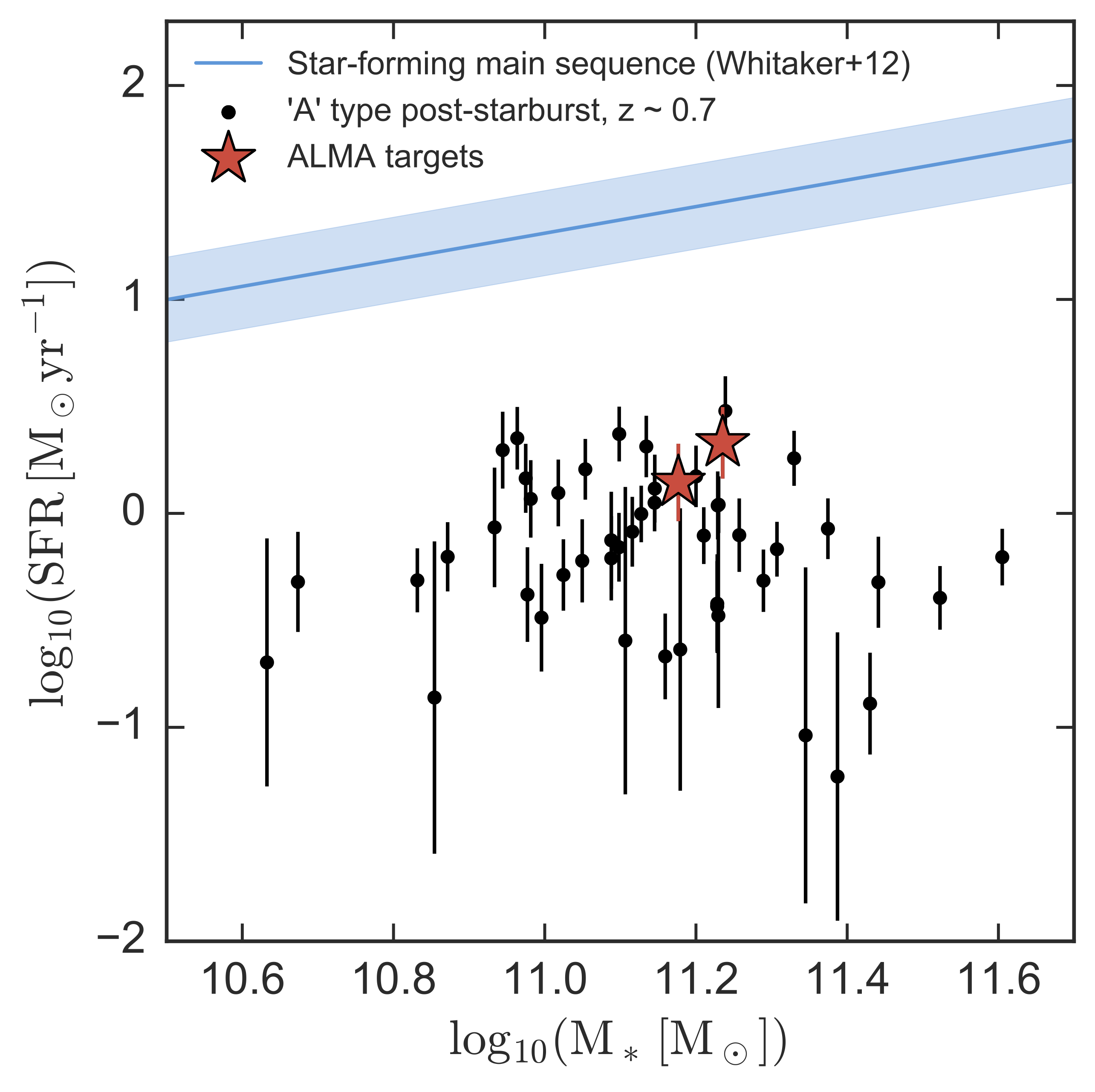 Here's the full post-starburst galaxy sample from Suess+17. The sample is selected from bright (i < 19), intermediate-redshift (z > 0.5), high-quality (median spectral S/N > 3.7) objects included in the full SDSS DR12 spectroscopic catalog (Alam et al. 2015). Post-starburst galaxies were selected from this parent sample according to the Kriek et al. 2010 method, which selects galaxies with "A-type" spectra by their strong Balmer breaks and their blue slopes redward of the break. We checked the final selection by eye to remove a few stars and brown dwarfs. In total, we found 50 post-starburst galaxies at 0.5 < z < 0.8. The text file below gives the IDs, redshifts, stellar masses, star-formation rates, and molecular gas masses for each galaxy in the sample. See Suess et al. 2017 for details on how the masses and SFRs listed here were calculated. IDs are 'spec' followed by the SDSS plate number, MJD, and fiber ID: these IDs can be used to query the SDSS database to see images, spectra, and photometry for each galaxy. If you use this sample, please cite Suess et al. 2017. 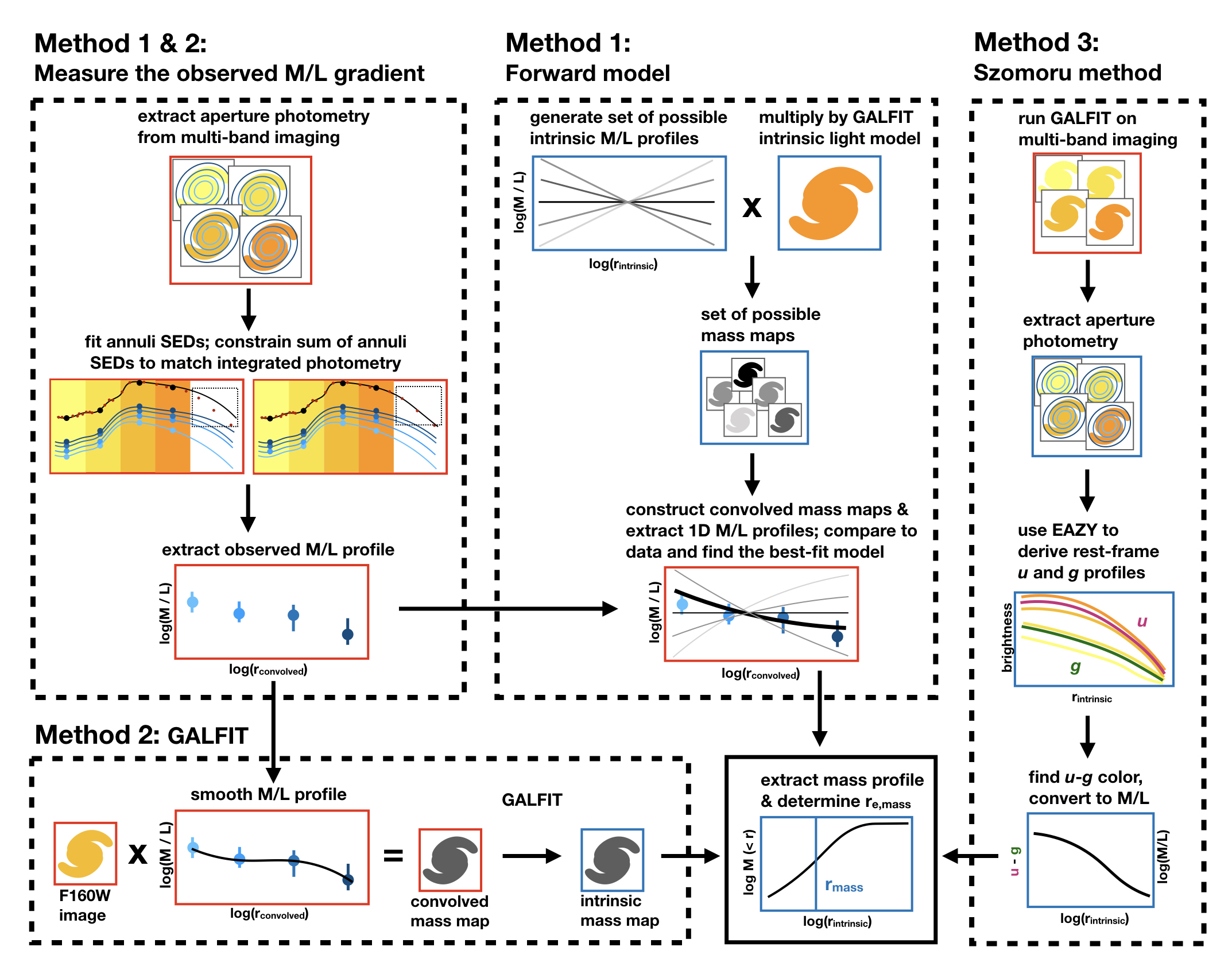 Here's the catalog of galaxy half-mass radii used in Suess+19a,b. The ID numbers match the v4 3D-HST catalogs. Half-light radii and sersic indices are from the van der Wel et al. 2014 catalog, and the three different "re_mass" measurements correspond to the three methods described in detail in the paper. The "isQui" flag is based on rest-frame UVJ colors, using the 3D-HST catalogs and the Whitaker et al. 2012 quiescent box definition. If you use these measurements, please cite Suess et al. 2019a for methods and z>1 galaxies, and cite Suess et al. 2019b for z<1 galaxies.